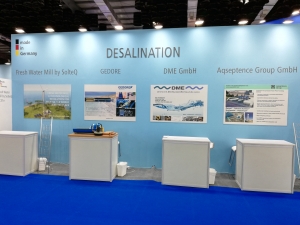 Wide-ranging water delivery and purification, solutions for the food and beverage industries as well as laboratory technology, analysis and other application areas are key issues in the future market of Africa. analytica Lab Africa, food & drink technology Africa (fdt Africa) and IFAT Africa will be co-located on July 9-11, 2019, the three trade fairs will be held every two years at the Gallagher Convention Centre in Johannesburg.

The co-location with analytica Lab Africa and food & drink technology Africa (fdt Africa) is sure to provide substantial synergy effects for both exhibitors and visitors.

South Africa’s economy is among the strongest on the African continent. Africa’s third-largest economy continues to be very appealing to Messe München. Stefan Rummel, the International Managing Director of Messe München who oversees the global IFAT cluster, is certain: “By combining the three trade fairs, we are creating a concept that will uniquely highlight the special features of the African market and offer the right, overarching solutions. As the organizer, we are not only seizing on the growth trend in the three industries but are also actively fueling it.”

Messe München has been expanding its portfolio in the future market of Africa for several years now: In 2014, drinktec entered the sub-Saharan region with food & drink technology Africa. A year later, IFAT continued the effort by holding the first IFAT Africa. With the recently acquired Lab Africa (which is now called analytica Lab Africa), Messe München expanded the range of its technology-oriented professional trade fairs even further. The local trade fairs provide international exhibitors with access to high-potential markets.